The CBSE Class 12 2017 board exams result have been declared on the official website on May 28. Most of the students who had appeared for the same will have a sleepless night today, some due to nervousness, anxiety and others due to excitement. But unlucky are those who will be visited by their relatives in these coming days.

Relatives, on this planet have only one task at their disposal, that is to visit their near and dear ones who have got their board results. Showing the results to your parents is not a shame, but showing it to your relatives can be a tedious task. Relatives mostly are like film critics, their criticism never matters, but it is their task to criticize.

Suresh Prabhu in a latest announcement has added salt to injury when he decided that special trains will be run for all relatives. According to him, no of passengers increases drastically during their board exam season as relatives have to visit maximum places to get to know scores of students.

Weeks before India ushers in the Goods and Services Tax or GST regime – billed as the biggest tax reform to create a uniform market in India – the powerful GST council cut tax rates for 66 items. Finance Minister Arun Jaitley announced the revised GST rates on Sunday.

“A total of 133 representations were made to lower taxes for different categories of goods and commodities. The council has lowered the tax rates for 66 items,” Mr Jaitley told the media after the 16th meeting of the GST council that includes all the state finance ministers.

Arun Jaitley confirmed that he has conducted 40 meetings with all state finance ministers to fix the rate of different commodities. Now that the major meetings are over, next week we have a meeting where we will decide whether GST is required or not. That will be a minor question. If my colleagues at state level believe that GST is not required then we will not implement it, but if they believe that it is required than other 30 meetings are planned for the next 6 months. Once all the meetings are over, we will conduct one more meeting to discuss about what was discussed in the previous meetings.

Rain delays are very normal during the ICC champions trophy 2017. In fact so much so that every person is taking about Duckworth-Lewis as if he/she is an expert on it. Most of the matches have been decided by the age old system used to decide truncated matches.

But have you ever thought how much a person can get engrossed in the calculations of duckworth-lewis. A Mumbai man had this bizarre experience of missing the whole Ind-SA match as he was busy in finding out scenarios in case there is a long rain delay.

We are talking about Sanil Srivastava who is a big cricket fan and has not missed a single live match in last 5 years, but yesterday was a different day. He started his day by taking out his old calculator and a sheet of paper, started listing down scenarios and runs scored by a team during a rain interrupted match.

His calculations were precise, his data would put any historian to shame. He had a chasing score calculated for every possible fall of wicket. In fact he did this for 8 hours, and the time collided with the Ind SA match.

He had kept 5 alarms for the match but kept on putting them to snooze. This went on till the night when he started watching news channels and came to know that India already defeated the South African team quite easily and all his efforts were a waste. Sanil should thank his wife who has always been supportive of his passion for cricket and recorded the whole match for him to watch later.

So whatever may the scenario be, always keep your TV on while doing your precious duckworth-lewis calculations.

While there were many renowned persons in attendance at the highly-anticipated match, it was a photo of Mallya in the VIP stand at Edgbaston stadium that was widely reported by both TV and print media. Clad in his trademark white coat and sunglasses, the loan-defaulting businessman was also seen chatting with former cricketer Sunil Gavaskar. The images, which were shared by Twitter users on the micro-blogging site, quickly went viral

The Indian government’s external ministry has taken note of this incident and have forwarded a request to ICC speaking about bringing the Indian cricket matches in the ongoing champions trophy to India. According to the ministry, this will surely bring Mallya to India as he has promised that he will be present at all the India matches.
Mallya, whose now-defunct Kingfisher Airlines owes more than Rs 9,000 crore to various banks, had fled India for the UK in March 2016.
He was arrested by British authorities in April on India’s extradition request in connection with a Rs 900 crore loan default case of IDBI Bank being probed by the CBI, only to be released on bail within hours by a London court. He’ll appear before the Westminster Magistrates’ Court on June 13 for the next hearing in the extradition case.

Ravichandran Ashwin has been responsible for spearheading India’s bowling for nearly a year now, especially during the home Test season. The ace off-spinner had been a revelation for the Indians in the previous edition of the Champions Trophy, and he will certainly look to continue his talismanic touch in the tournament this year as well. But he was not picked for the first match against Pakistan and it has led to lot of speculations.

Finally Virat Kohli clarified the matter in his post match interview. According to Virat, “Ash is the only engineer in our squad, and we wanted to use his strength , i.e engineering for the benefit of the team. Against Pakistan we were not only battling a team of 11 members but also the system of duckworth-lewis. The only person eligible to crack it is Ashwin and so we kept him inside the dressing room. He used to calculate the runs required by Pakistan after every over, and that made our task simpler.”

A day after the results of Bihar’s plus two examination were announced in which 64 percent of students failed, agitated examinees on Wednesday protested outside the Council office in Patna against poor pass percentage. 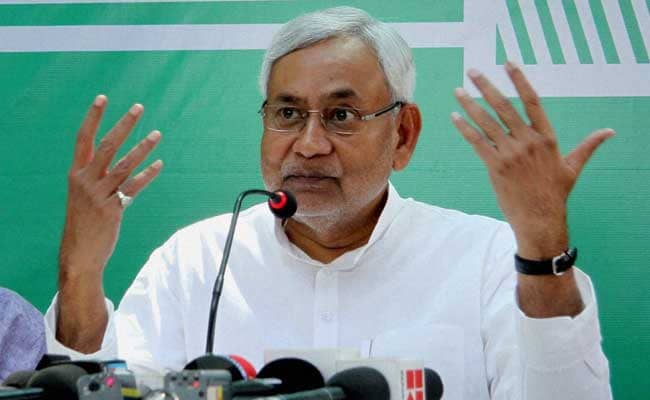 A large number of students gathered outside the Inter Council office to protest unsatisfactory results. A few of them also tried to climb the main gate but were prevented by police.

But Nitish Kumar is unfazed by the poor results. In fact he has been portraying it in a positive way.  According to Nitish, the poor board results mean that government has been able to stop cheating on a large scale which is good for the future. Students were not able to cheat in the exams and that’s the reason they failed.

In 2007, when Flipkart — the posterboy of India’s e-commerce industry — received its first order for a book, it offered a 10 per cent discount to the buyer. While that discount may not have been part of an effort to drive sales at the time, the online retail industry has since heavily depended on discounts as a strategy to expand its consumer base via sales which are announced every few months

More often than not the burden of discounts is borne through funding received from venture capitalists and private equity investors — a point raised by traditional retailers that led to the commerce ministry disallowing online marketplaces from offering price reductions on goods listed on their platforms. However, this hasn’t stopped discounted products from being available on marketplaces

One of the leading e-commerce companies in Mumbai named ‘RasteKaMaalSaste.com’ has experienced a shocking trend in recent days. On one of the week days, it forgot to announce biggest sales on its website, and to every one’s surprise, sales on that day were maximum. The senior management held discussions regarding the same and came to the conclusion that most customers think that prices of discounted goods are way too inflated and it is better to sell them at normal prices rather than attracting customers through non-existent discounts.

Actress Anushka Sharma and her cricketer boyfriend Virat Kohli, yet again stole the show at the premiere of Sachin Tendulkar’s biopic, Sachin: A Billion Dreams, in Mumbai on Wednesday evening. This is Anushka and Virat’s second appearance together within 24 hours – the much-talked about celebrity couple were the special guests at cricketer Zaheer Khan and actress Sagarika Ghatge’s engagement party on Tuesday. But Anushka skipped the all-important net session of the Indian team which is prepping for the champions trophy. Media speculates that a break-up is surely on the cards.

According to the media persons, attending engagements and weddings are fine, but you should definitely attend the net practice sessions if you are serious about your boyfriend.  Anushka has not yet commented on the issue but Virat has assured the reporters that it was a one-off and Anushka always attends all the practice sessions, training sessions and the fitness sessions.

The next practice session is planned for Monday, and journalists are eagerly waiting to see what transpires between now and then.

Tejas Express, which was flagged off on the Mumbai-Goa route on Monday, is completely booked for seven days. All seats, including expensive executive chair car, on the swanky train is full till the month-end. But passengers are still not happy, and are demanding more facilities, top of which is a dedicated spitting area inside every compartment.

The train is full of new luxuries for Indian passengers, some of which are LED screens, Bio-toilets, Coffee vending machines etc. But the passengers are demanding more and more. A Mumbai based company did a survey of all passengers on board and asked about any new facilities they want. Most people wanted a dedicated spitting zone inside the train as with automated doors they won’t be able to spit Gutkha outside the train while the train is moving

Mumbai: Online grocery shopping is a major hit among the urban ladies. But it is still a unchartered territory for many new housewives who are new to the city. For them the ‘bargaining’ experience at a local outlet or a street vendor is much more satisfying then the pick and add to cart without bargaining methods provided by online grocers.

In a similar incident Sneha Srivastava from Mumbai has sued a major online grocer, namely, small basket.com for not providing the bargaining experience which she was craving for ever since she entered the city few days back. Sneha shops herself for all the household needs and somedays back was introduced to the online medium by one of her friend. She found the medium interesting and started placing her order.

She was shocked to not see any bargain button on the website and she even called the customer care to know whether it was a technical glitch. Finally as a last resort, she has filed a case against the online grocer and the PIL is under observation of the magistrate.

Get your articles published without having to wait for a slow editorial team of mainstream Funfunnykhez News to reply and edit your submissions.